After several spy shot appearances and official teasers, Aston Martin unveiled the performance flagship of the DBX range that is dubbed the DBX707. Keeping its promise, the new variant is the most powerful luxury SUV in the world with 697 hp from its tuned twin-turbo V8 combined with a new wet-clutch transmission, chassis upgrades, and visual tweaks.

As a result, the DBX707 is more powerful than any other SUV currently available in the market including the 641 hp (478 kW / 650 PS) Lamborghini Urus and the 626 hp (467 kW / 635 PS) Bentley Bentayga Speed. Aston Martin will likely retain this title until rival automakers’ plug-in hybrid performance SUV variants arrive in the next couple of years.

In order to bring all this power on the road, the DBX707 gets a new nine-speed wet-clutch transmission replacing the DBX’s torque converter for faster gear changes. Thus, in combination with a tweaked all-wheel-drive system and an upgraded limited-slip differential, the SUV can accelerate from 0-100 km/h (0-62 mph) in 3.2 seconds. Aston Martin claims a top speed of 310 km/h (193 mph), making the DBX707 the fastest model in the luxury SUV segment surpassing the 306 km/h (190 mph) top speed of the Bentley Bentayga Speed.

For greater driving dynamics the DBX707 received a series of chassis tweaks over the standard DBX. These include a new setup for the adaptive triple-chamber air suspension with new damper valving and recalibrated springs, the steering, and the electronic systems. Stopping power has also been improved thanks to the standard carbon-ceramic discs measuring 420 mm (16.5 inches) at the front and 390 mm (15.4 inches) at the back with six-piston brake calipers.

Moving on to the exterior, the DBX is already a handsome SUV but the redesigned bodykit makes the DBX707 look even more aggressive from every angle, communicating the improved performance credentials. At the front, changes include the larger grille flanked by new intakes and DRLs, plus a more prominent splitter. These additions are not designed just for show, as they improve aerodynamics and offer more cooling for the engine, gearbox, and brakes.

The optional 23-inch forged wheels (standard 22-inches) enhance both the proportions and the handling, while the side sills have an integrated fin towards the rear. The tail, which was the strongest point of the DBX, gets an impressive F1-style diffuser sticking out of the lower part of the bumper that also houses larger quad exhaust pipes and vertical inlets. Finally, a sharp rear spoiler extension is adding visual drama. The aero kit is finished in gloss black but it is optionally available in carbon fiber.

Getting inside the cabin you’ll notice the new soft-close doors and the redesigned lower part of the center console. The latter gets new drive mode selection switches, including dedicated buttons for suspension mode, ESP, manual gear selection mode, and active exhaust switch, allowing the driver to quickly select his/her preference without going through the touchscreen menu like in the DBX.

Another addition is the standard Sport seats (comfort seats are a no-cost option) with 16-way electric adjustment and heating. There are three choices of interior environments with the standard option offering a mix of leather and Alcantara combined with piano black veneer. Of course, Q by Aston Martin is here for customers who want more personalization in terms of color, trim, and materials.

The first deliveries of the Aston Martin DBX707 are scheduled for the second quarter of 2022, with a starting price of $232,000 in the US market. This makes it slightly more expensive than the rival Lamborghini Urus but still cheaper than the Bentley Bentayga Speed.

Is This VW's New Talagon X SUV For China? 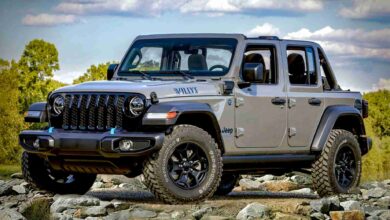