Audi will unveil facelifted versions of both the e-tron and e-tron Sportback on November 9 and has teased both models. In readying the mid-life facelift for the two SUV models, Audi has also renamed them so they will now be dubbed the Q8 e-tron and Q8 Sportback e-tron.

A single image of the two models has been shared to Facebook and showcases both models from the rear. The differences are hard to notice but we can see that both models sport very similar LED taillights and a light bar to the pre-facelift model. We suspect that some alterations have been made to the graphics of the taillights, even if their overall shape has not been changed.

Mind you, this isn’t our first time seeing the new Q8 e-tron and Q8 Sportback e-tron. In September, Audi showcased a thinly-camouflaged prototype of the updated model. It came complete with a revised front grille and a tweaked front bumper with new air intakes. Audi also made some styling alterations to the rear of the EV.

Technical specifications for the new Q8 e-tron and Q8 Sportback e-tron are not yet known but reports state that an updated powertrain could come as standard, complete with an upgraded battery pack, more efficient electric motors, and a better energy recovery system. These improvements could see the range jump from the current 272 miles (440 km) to as high as 373 miles (600 km) in the WLTP cycle, no doubt welcome news for those wanting to pick up the keys to the SUV.

VW Amarok Previewed As An Overlanding Beast By Delta4x4 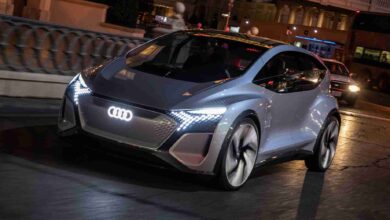