The saying ‘there’s no replacement for displacement’ isn’t true in the electric era and Mercedes-AMG is making that perfectly clear as they’ve taken the wraps off the all-new EQE 43 4MATIC and EQE 53 4MATIC+, though the U.S. will only be getting the latter.

Power comes from a 90.6 kWh lithium-ion battery pack, which is slated to give the car a range of between 287-331 miles (462-533 km) under the Worldwide Harmonized Light Vehicle Test Procedure. When it comes time to charge, owners will find a standard 11 kW on-board charger, but they can also upgrade to an optional 22 kW charger. The model also features a fast-charging capability of up to 170 kW and this allows the car to be given 112 miles (180 km) of range in as little as 15 minutes. AMG-Specific Electric Motors And An Assortment Of Performance Upgrades

Both models have AMG-specific electric motors with a “highly resilient thermal concept, which allows [for] repeated acceleration maneuvers with consistently high performance.” Among the highlights are so-called water lances and AMG-specific cooling elements such as special ribs on the stator and a “needle-shaped pin-fin structure on the inverter, which is made of high-performance ceramics.”

Sport and Sport+ modes optimize performance, while Comfort mode helps to optimize the car’s range by reducing the output 15-20%. Speaking of which, the car’s full output is only available in Sport+ and Race Start modes. Slippery mode reduces the output by half, while even Sport mode only gives you 90% of the car’s available power.

On the topic of range, the car’s stamina could be improved in the future as the company noted it’s possible to install updates for the battery management system over-the-air.  This promises “continuous improvements over the life cycle” of the vehicle.

Engineers also focused on increasing battery life as the EQE features an Eco Charging function, which “reduces the battery load during charging, and thus slows down the natural aging process of the battery.” Furthermore, there’s a “charging interruption” function that can be used to charge the battery at off-peak times when energy prices are lower. Mercedes also noted the battery can be preheated or cooled while driving, in order to reach the optimal temperature for fast charging by the time it arrives at a charging point.

It’s also worth mentioning the AMG variants have three different levels of energy recuperation, which can be adjusted via the steering wheel. This allows for one-pedal driving as well as optimized deceleration when Drive Pilot is engaged. 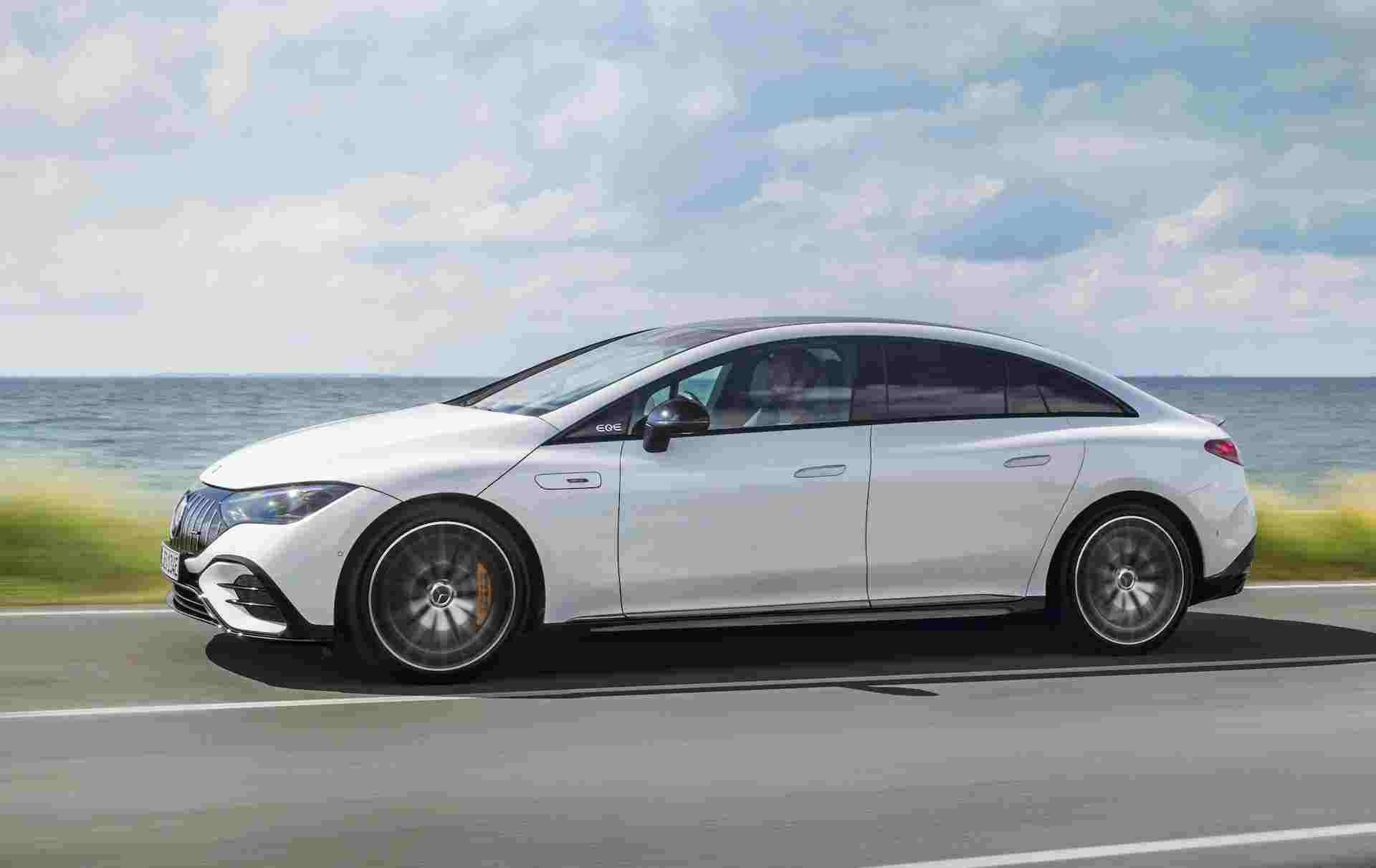 Another highlight is the rear axle steering system, which is standard on both models. It enables the rear wheels to turn up to 3.6 degrees to improve handling at speeds above 37 mph (60 km/h).  At lower speeds, the front and rear wheels can turn in opposite directions to maximize maneuverability such as when parking.

While electric vehicles are virtually silent, “sound has always been an important part of the hallmark AMG driving experience.” As a result, the AMG versions of the EQE have a “unique sound experience” which is created with the assistance of special speakers, a bass actuator, and a sound generator. Most models come with an Authentic setup, however the AMG Dynamic Plus Package on the EQE 53 adds a Performance take on the idea. Regardless, both offer Balanced, Sport, and Powerful settings.

AMG is known for beefy braking systems and the EQEs don’t disappoint as they come equipped with six-piston front calipers and 16.3 inch (415 mm) front discs, which promise to deliver “first-class deceleration values with high resistance to fading.” They’re joined by single-piston calipers and 14.9 inch (378 mm) discs out back.

Customers who want to take their EV to the track can opt for the optional AMG ceramic braking system. It requires owners to upgrade to 21-inch wheels, but they’ll find larger and thicker front discs measuring 17.3 by 1.6 inches (440 by 40 mm). While the AMG variants are certainly unique, exterior styling changes are relatively subtle. That being said, there’s a fully enclosed grille which features AMG badging as well as vertical chrome accents. Moving into the cabin, there are AMG sport seats which feature Artico man-made leather as well as microfiber inserts and red contrast stitching. If your eco-friendliness only extends to what you drive, you can also opt for traditional Nappa leather.

Besides the sport seats, the AMG variants feature a flat-bottom steering wheel, sport pedals, AMG floor mats, and plenty of AMG badging. The models can also be equipped with an optional MBUX Hyperscreen, which consists of three separate displays including one for the front passenger.

We’ll learn more about the models closer to launch, but both will slot beneath the Mercedes-AMG EQS 53 4MATIC+ that debuted last year.