As the new and used car market continues to boom, some buyers are finding it incredibly hard to get the car they want. The chip shortage, the pandemic, and inflation have only made the situation worse. Now, one new crowdsourced website is actively helping buyers avoid another frustration, wild dealer markups.

Markups.org allows buyers to search its crowdsourced database that covers the entire nation. They can even sort by state, vehicle, or markup amount and it’s that last attribute that dropped our jaw.

Some of the markups taking place around the country are so ridiculous that it’s hard to overstate that, as Jalopnik points out. One text screenshot shows a Chevrolet dealer reportedly requiring a $50,000 donation to a children’s charity as part of the price for a new Corvette Z06.

Someone has started a website to keep track of dealer markups and reward those with no markups with rankings. Fully crowdsourced. https://t.co/TBUfjkaRJN pic.twitter.com/YMtxDpAJYz

We contacted one dealer in Oakland that’s mentioned on the site with a picture showing a $40,000 markup on a Toyota RAV4 Prime. To put that in perspective, the vehicle itself was valued at $46,783. A representative named Rony Melara told Carscoops that they didn’t have any more Primes in stock and that the window sticker seen on Markups.org was likely a typo that was fixed after the photo was taken.

While we can’t verify that, it’s interesting to note that the dealer website doesn’t list any prices for new cars but does specifically say “Pricing and availability may vary based on a variety of factors, including… additional dealer markup.” It’s also weird that nobody would’ve noticed the correct math at the bottom of the sticker. 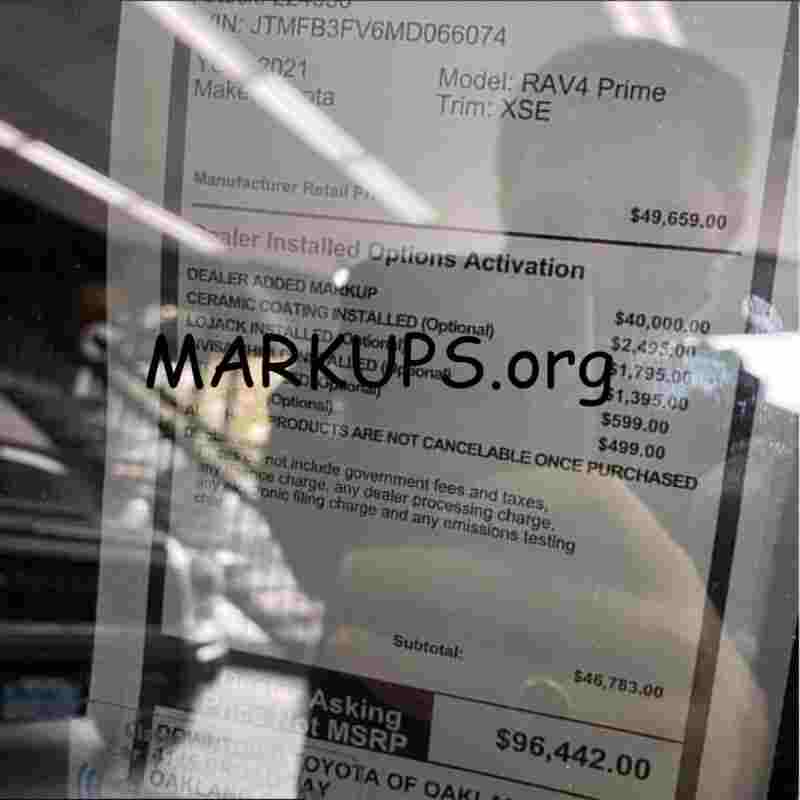 Let’s also keep in mind that this sort of communal online space is subject to what could be unscrupulous reports. Many of the top markups listed right now offer no proof of any kind aside from the fact that somebody took the time to report them in the first place. That doesn’t make them true and even some of the reports with photos or text message screenshots could be less than genuine.

Is it possible that dealer markups are going to go the way of the Dodo sometime soon? Tools like this one could surely help with that now that many brands are speaking out against dealer markups. If anything, it could be a way to sort out and name-shame dealers that aren’t charging a markup. That way they get extra business and buyers get to pay what the vehicle is supposed to be sold for. The Last ICE 2025 Audi Q5 Spied For The First Time